Photo of a week

This time as a photo of a week, I present you old and great Norton Commander. Bachoo of Save The Floppy( PL language only 🙁 )
portal organizes an old-school event every month.
That’s where I took this photo. I used Norton heavily at the beginning of my adventure with early PCs. 386DX-40 with 4 megs of RAM was my first but obviously, before that, I had plenty of opportunities to run soft on XT and AT.

Back to printing – rubber

This post will kinda, mix topics.
Let’s start with the cool, but hard-to-print filament that I used prior to switching to 1.75 mm.
It is an elastic kind of filament that has a melting point of around 200 degrees. Unfortunately, I cannot recall a brand of it. Anyway, it is one of those rubber-like filaments and it keeps these properties after printing. The problem with it is, that it just does not stick to the damn hotbed. I’ve tried several approaches and I’ve failed miserably.
Anyway, I’ve chosen a model that is not afraid of warping – a flap 😀
I simply didn’t care if it is warped as long as it sticks to the hotbed until the model is fully printed.
It is also worth mentioning that post-processing models printed out of a rubber-like material are a pain in the ass to clean …. but doable 😉 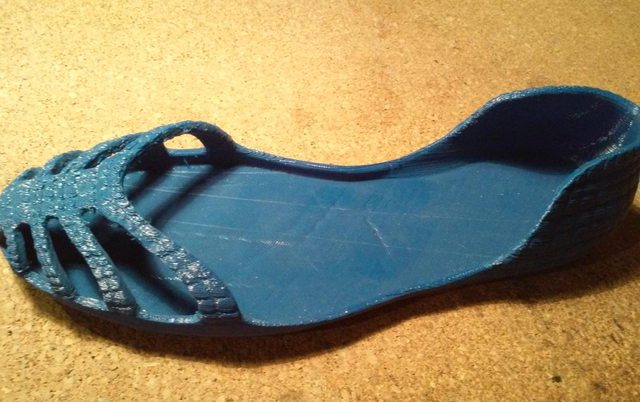 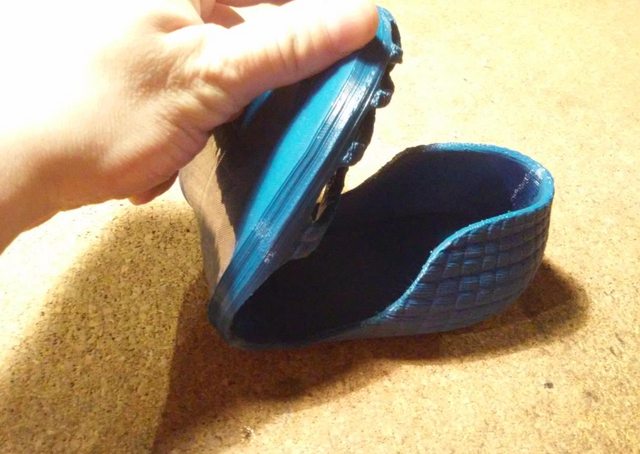 What to do with leftovers of PLA

Gepard/Lamers asked me to model out and print a part to his 5.25 floppy disc boxes, the other day. I’ve quickly drawn a model which in fact is a part of the hinge – a small plug. 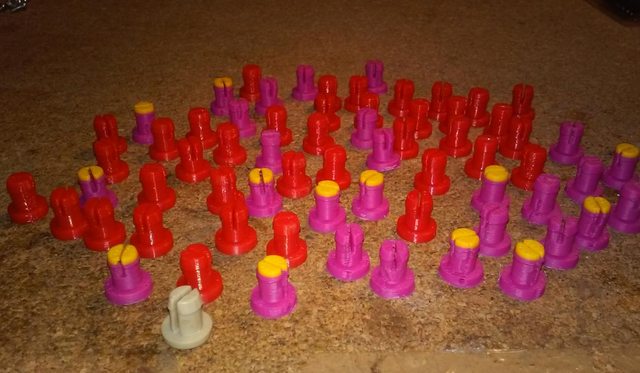 I’ve tried to print it with ABS (pink on a photo) and the result wasn’t great. That is because I never use a fan to cool down prints during printing (yeah, I know, I need to add FAN cooling someday ). However, PLA (red on a photo) works perfectly fine since it sorta cools down quicker (hotbed set to 50 degrees C)
The idea was to use leftovers of filaments that I had lying around and in case one finished, I could easily swap ’em during printing.
After these experiments, I’ve come up with an idea (obviously already known) that I am able to print multicolor objects.

The above experiment was nearly just in time with a request that came to me. Sachy/Lamers (Main RetroKomp party organizer) asked me and Johny/Lamers to 3D Print a RetroKomp Star Award – a major prize to honor deep involvement in the demoscene, retro computing, etc., etc.
We’ve already known that super awesome old-school Polish C64 demoscene group – QUARTET will be a winner, so that made it a custom print request.
Johny made a 3D model that was IMO great.
He’d created a model that combined two parts. The bottom one formed a base and a second with the QUARTET logo. However, Sachy raised a bar and asked if I could print it in two colors – preferably C64 logo colors – blue and red.
The good thing is that I actually had filaments with nearly exact colors for this project. I’ve started to print out a model that I’ve received from Johny.
The base part was a piece of cake. I had a movie and photos of the main part being printed but it got lost when one of my hard drives failed (yeah yeah, RAID FTW!).
The main part, the one with a logo, was printed normally but I had to swap filament to red in a proper moment.
Here is how it looked. 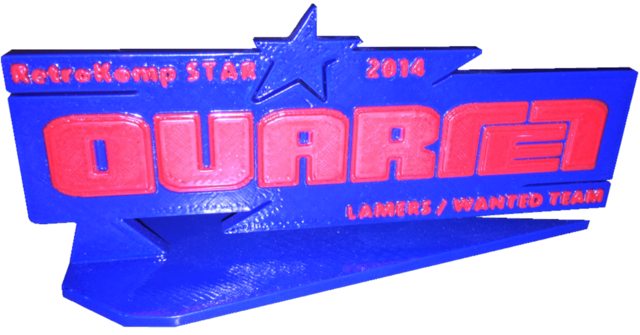 Hopefully, they liked it 😉

We had a small drinking session with demoscene friends at my place. During that drinking session, we came up with an idea to honor Grey/MSB (SillyVneture party organizer) with a custom 3D-printed statue.
The party was about to start within a few weeks so we were already short on time. Like last time, Johny of Lamers created a 3D model. This time it had four parts.
Two parts for the base with text printed on it
A third part – an ATARI logo and a fourth part – a figure of Atlas holding an ATARI logo.
Obviously, Atlas’s figure was the hardest part to print.
After a few failed prints, I finally got what I wanted.
Post-processing of this figure took a while. It had to be carefully sanded and treated with acetone vapor several times.
Here is the outcome. 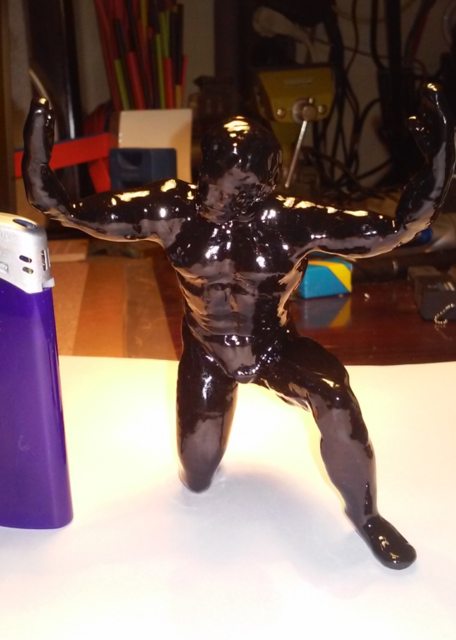 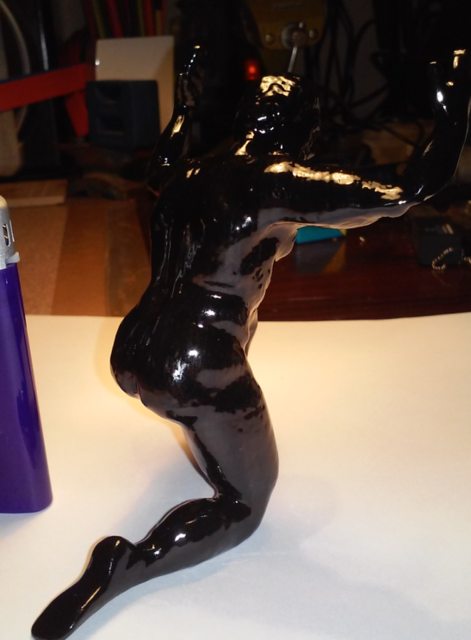 And here is how it looked after assembly with the base filled with resin(to make it feel heavy). 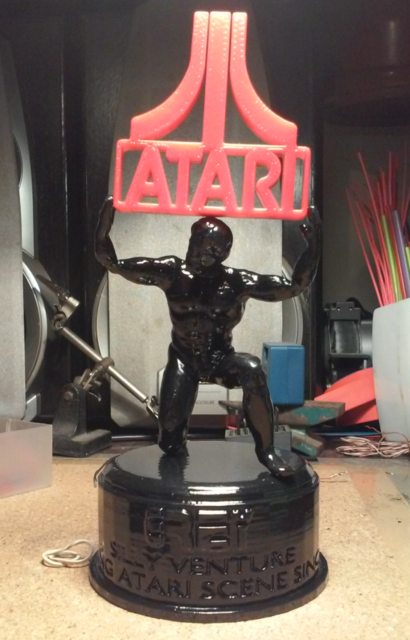 A photo of a statue short after giving it to Grey at a SillyVenture 2014 party. 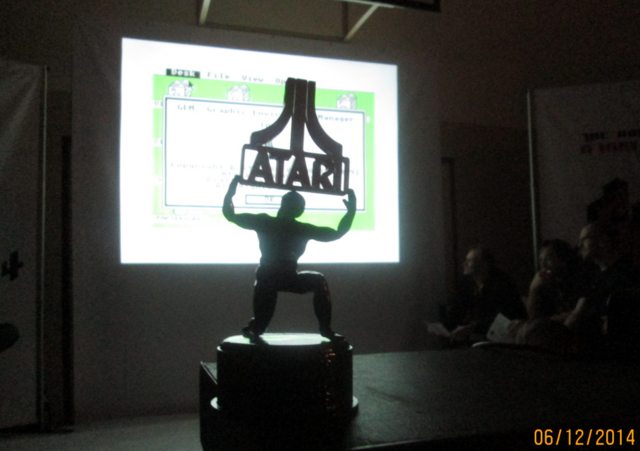 Hopefully, he liked our idea and the prize itself 😉

I’ve found a nice model of a horse on thingiverse.com.
Since my wife is a horse fan I’ve figured I could make a nice 3D printed horse as a birthday gift so I could get away with boring gift searching 😀
I wanted to print (ABS) a model horizontally in two parts and join ’em afterward with acetone.
Since this print had to be heavily post-processed I didn’t bother to print it in less than 0.3 mm per layer.
Below is a photo of a figure already glued together. 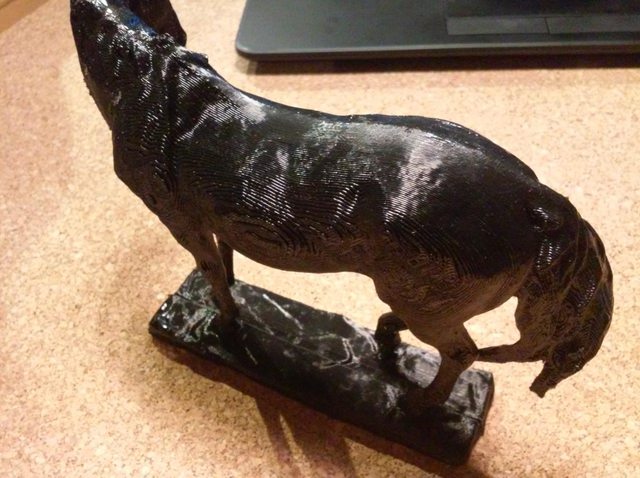 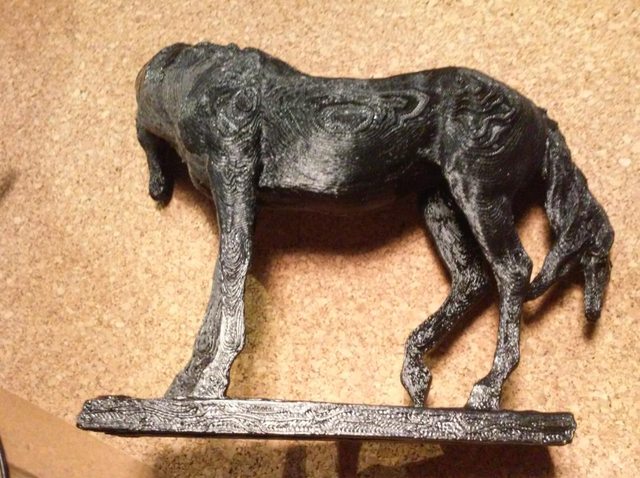 Later on, it had to be treated with a rotary tool to smoothen the surface. 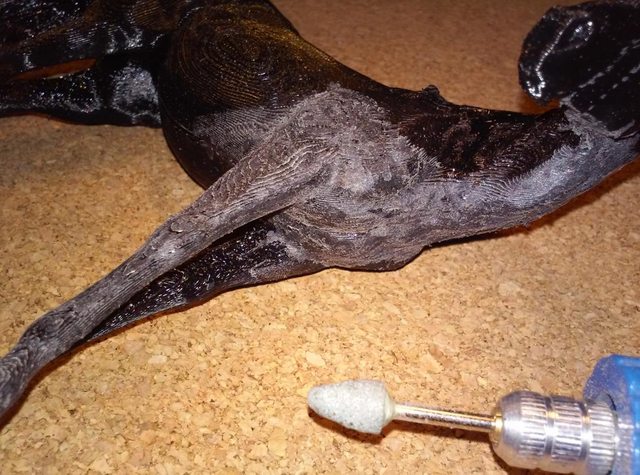 A shot after the first sanding round. 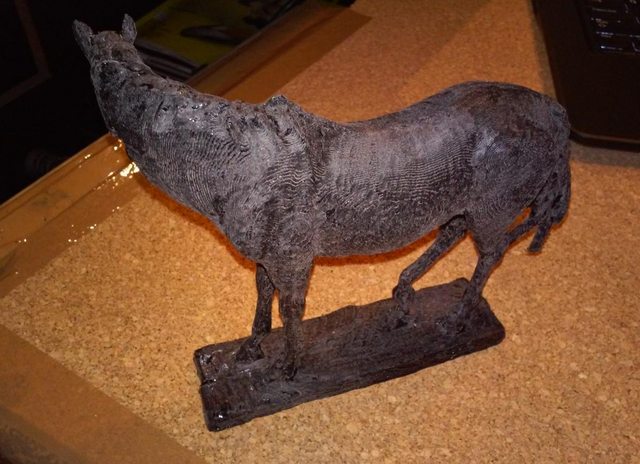 Here is a photo of it during the first acetone vapor treatment. 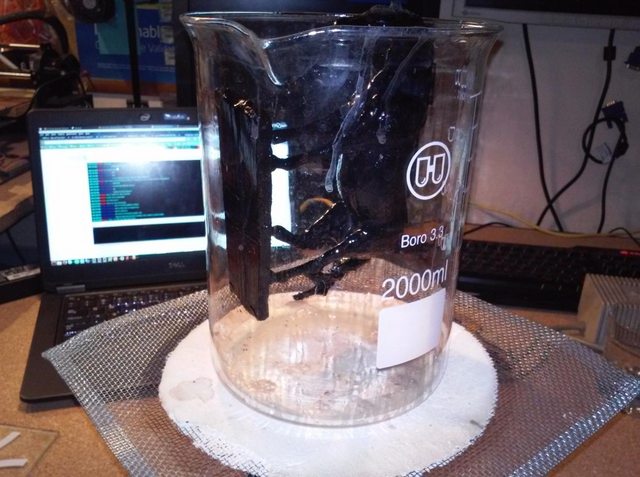 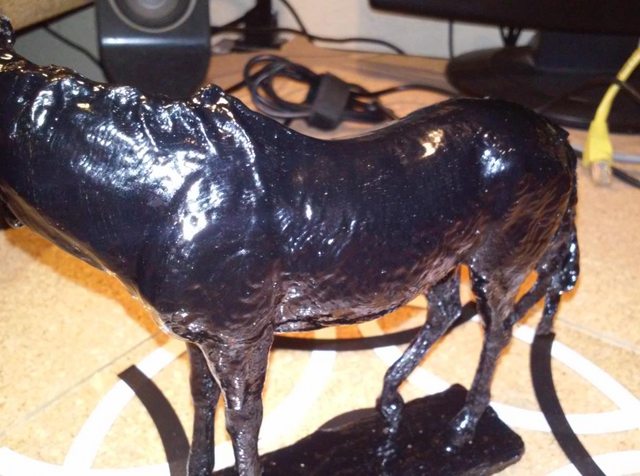 Finally, after two more iterations of the above process, I’ve ended up with this. 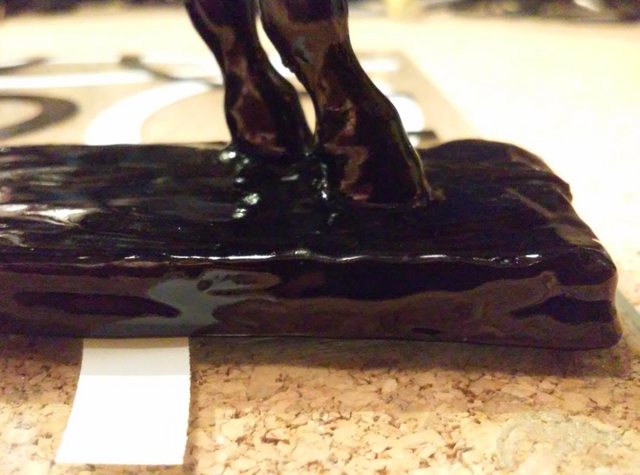 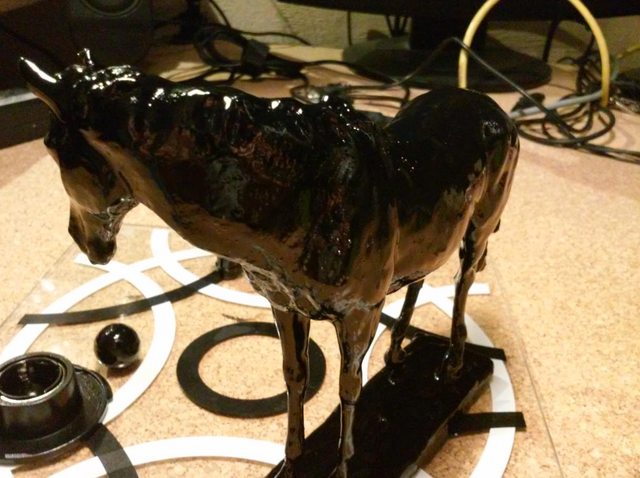 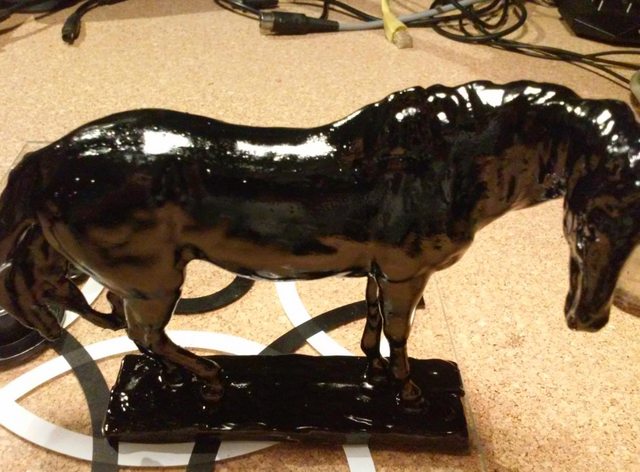 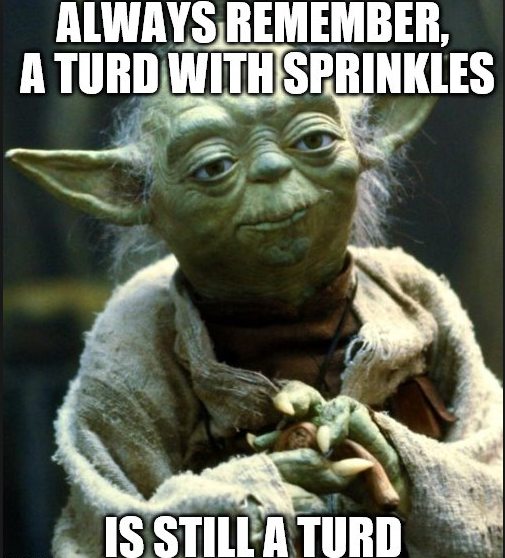