… or how I started with retro computing.

Back in 1986, as a six-year-old boy, I had an opportunity to play with ZX Spectrum.
Wow, that was a joy back then, Space Invaders, Knight Lore, and stuff.
Thing is, I instantly knew that I was gonna spend the rest of my life punching those funny little buttons with letters on them…. and it happened to be true ( Not ZX buttons ofc :> )

A year later my parents bought me an Atari 65XE powered by an XC12 cassette data recorder. I`ve kept this computer for all those years. Originally it looked like this (not my photos): To skip the past few years of my life since then, I`ll just jump to 2012 when I’ve figured out that there is an Atari party near my workplace. SillyVenture 2012 – the biggest Atari event that I am aware of, at least on this side of the globe.
Well, it all started there. I met some great people at that party.
After attending it I was super excited so I started browsing the web for various mods and extensions. One photo got my full attention. It was a concept/artwork.

….. and that is when the Uber Atari Project idea was born…

So I had base hardware – Stock 65XE straight from `87 🙂
Not so much to play with, especially with no cassettes.
Shopping time!
That was one of my first garage projects so I’ve made quite a lot of mistakes.
Anyway, here is a basic plan :

That was quite an easy part (I will cover it in detail in a post about refurbishing old cases). I just had to cut out some holes for the LCD, SD Card, and VGA connector then the sandpaper whole case. The next step was to spray the undercoating layer – Motip car undercoating worked for me quite well. After 20 minutes I could finally spray on a black matt layer – also, Motip car paint in a spray can. Final effect with already mounted parts: 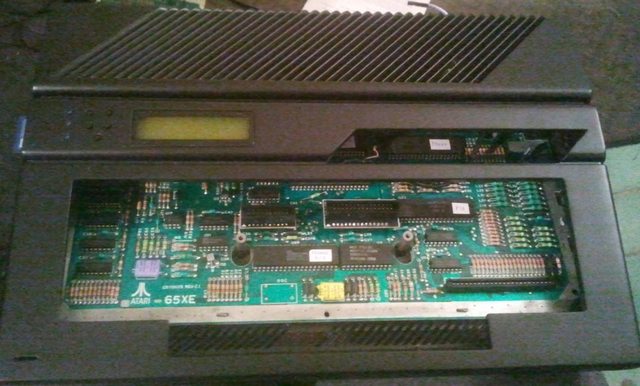 This, in turn, was the hardest part. I’ve bought several PC keyboards and figured out that I cannot simply replace keycaps because of the different mounting. After a while of sitting on a toilet throne, an idea of how to deal with this problem was born 😉
I’ve just needed one small detail ….. 3D Printer.
So I’ve built one HA! (I`ll cover this story in a future post)
Idea relied on trimming PC keycaps, 3D printing custom pads then gluing it together, and voila! 🙂
You can see a trimmed keycap, a custom pad, and a printing process itself in the video below.

Printing keyboard pads for Atari 65XE from pit on Vimeo.

As you can see in the above video I still needed to fix the spacebar. That was accomplished by merging two separate spacebars from PC keyboards. After soldering iron merging, sanding, filling, and painting that step was also completed.

The next step was to add a backlight. That was not that hard after all.
I’ve bought a typical LED stripe. However, I had to modify it to suit my needs.
I’ve removed resistors and soldered them on a wire so all LEDs were connected in parallel. Then simply I applied 5V to it via a potentiometer to figure out desired brightness. Once I did that, I could measure the potentiometer value and exchange it for a standard THT resistor to save space.
Here is how it looked. 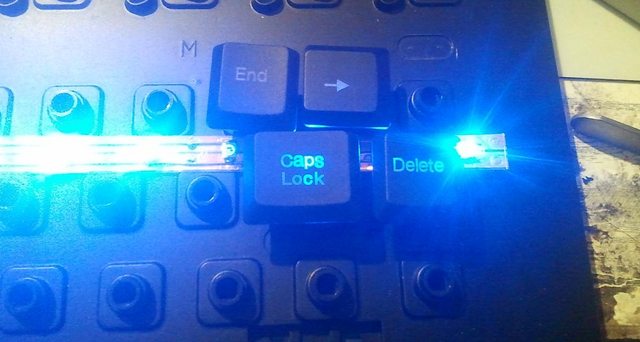 Then I simply assembled the whole thing and moved on to other mods.

SIO2SD is a great piece of hardware. It allows you to load games and apps from an SD/MMC card. Firmware is still being developed and maintained. Here is a projects website: http://sio2sd.gucio.pl/wiki/English

There are two options to get this device. You can build one yourself like I did a few months after I finished Atari modding (which will be covered in another post), or you can buy one. As a total atari mod noob, I’ve simply bought one, modified it a bit, and glued it inside atari. The poor-quality photo is below.
Yup, I know it looks like crap but keep in mind that was my first project of that sort so I had to improvise a lot ;P Another great project created by Sebastian Bartkowicz a.k.a. Candle and produced by Przemek Krawczyk a.k.a. Lotharek – Cheers Lodzio ;P
This one expands your 8bit Atari memory up to 1 MB of RAM !!

It took me quite a while to get it working, simply because I did a few lame mistakes. The major mistake was that I had the wrong temperature setting on my soldering iron and I’ve fried a few soldering pads. So instead of having it done properly with adapters like this: 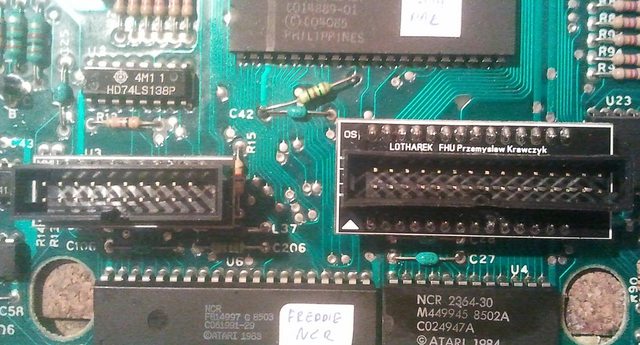 I’ve ended up with a solution like this 😀 but hey! It works ok! ;D The Ultimate1MB is fixed in place 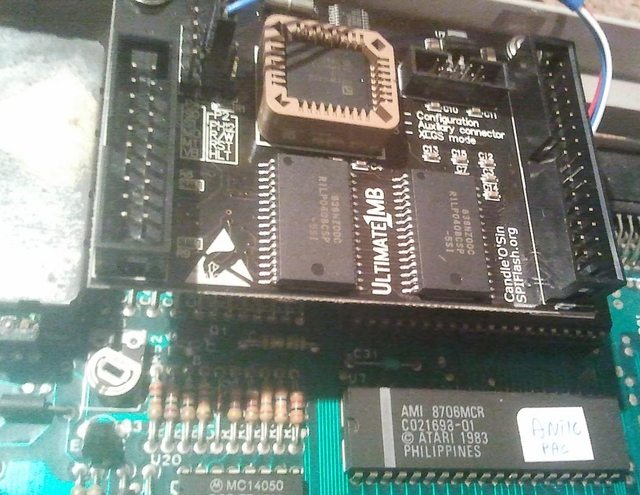 This mod, unfortunately, didn’t work as expected.
I’ve bought a cheap video converter that I simply put inside atari. However, the quality of the display is rather poor. Sometime after finishing this project I figured out it is PSU’s fault. I should have added a voltage regulator with a filter to get rid of noises and I’ll do that someday. You can see what I mean in a final vid. There are vertical stripes all over the place 😉
Anyway, here is how it looks. Because of my failed VGA mod, I had to get a better display quality.
I’ve found this great article by Jon Halliday.
Here is a link to the PDF: http://blog.3b2.sk/igi/file.axd?file=2012%2F5%2FUltraVideo+XE+1.0.pdf

All you have to do is to desolder the original modulator, replace a few components and mount the S-Video socket so you’ll have chroma and luma signals separated and tuned.

Back in `87 power supply units were rather large and bulky.
Nowadays you can get a small, nice and cheap PSU. This mod required only replacing the power socket and getting a PSU that could handle my expanded atari load (LEDs, mods, etc.).

So this is it. After reassembly of my 29-year-old Atari 65XE, I can now play some demos on it 😉
I would do some mods completely differently now, but hey! nobody’s perfect ;P

Here is a vid of how it works and looks.

Without your support, we simply cannot grow and we have a lot of new cool retro hardware (and more) products to come 🙂

2 thoughts on “Atari 65XE on steroids”